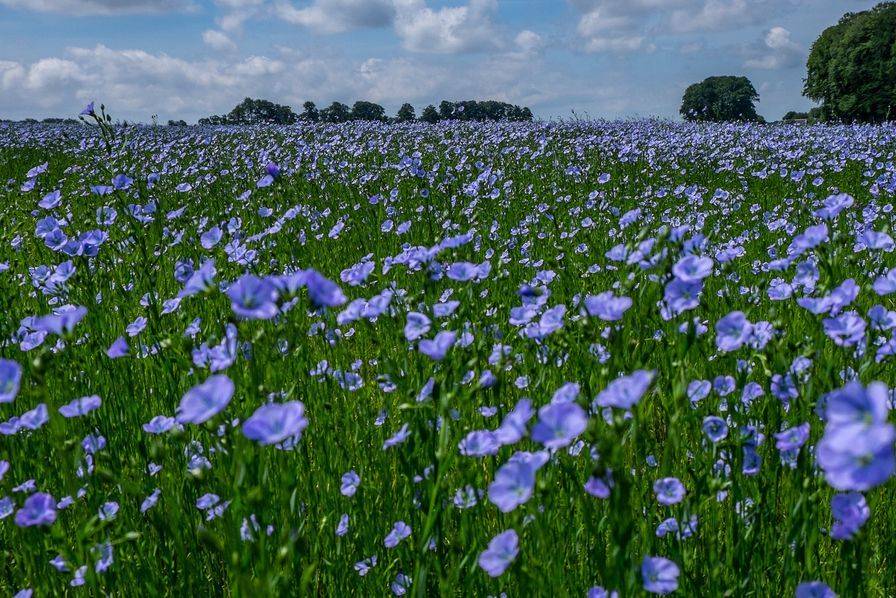 Do you know what a wonderful material linen is?

The oldest fragments of linen textiles are found in Egyptian tombs.
The Phoenicians introduced it to Greece, Rome, Brittany, England and Ireland, but also to India and China.
The use of linen spread to Gaul and later, Charlemagne, a fervent admirer of this beautiful fabric, put it in the honour of his court.
In the thirteenth century, the cultivation, spinning and weaving of linen were mainly developed in Flanders, which traded it with Italy, the Netherlands, England and Spain.
In the seventeenth century, in the courts of kings, beautiful outfits flourished under which fine embroidered linen Baptist shirts were slipped; linen for day or night use was born.
1685: the revocation of the Edict of Nantes causes the exile of many linen workers to the Netherlands, Switzerland, Germany, England and Ireland.

80% of the world’s production comes from Belgium, France and the Netherlands. The best linen is cultivated from the Plaine de Caen to Amsterdam, an ideal region for its soil and climate, alternating rain and sunshine.
Planted in March, linen flowers in June. At maturity, it is pulled up and left on the ground for retting, which will then allow the extraction of the fibre composing the stems, during scutching. The extracted fibres are then sorted by quality. The longest, the purest, will give a finer thread while the short, thicker, less regular threads.
Linen is cultivated for its fibres but also for its oil seeds.

After weaving, the textile will undergo various stages of finishing: washing, bleaching, dyeing, finishing. The natural colour of the linen is due to retting, stay on the ground, will therefore depend on the climate and the nature of the soil.
The finishing treatments have evolved: the linen is washed, softened and made more supple. These treatments make it much more pleasant and easier to use. No more rigid and brittle linens, with the marked folds of our grandmothers’ sheets or tablecloths!
﻿﻿

The cultivation of linen, unlike cotton, requires little water.
It is also regional, local and does not require transport.
It is a natural fibre, biodegradable.
In addition to the textile outlets, linen can be used in various fields: construction, automotive, sports or health equipment, stationery … No waste!
Durable, linen fabrics are very strong and last for a long time without warping or linting. Successive washes soften them and make them more supple.

On sleep: one sleeps better and deeper in linen, a more restful sleep.
Linen promotes the body’s thermal well-being, not its breathability; its fibres make it a natural insulator: cool in summer, comfortable in winter.
It does not cause allergies.

Trying linen is adopting it!
Living material, so pleasant, so comfortable and ecological
Discover our linen dresses and shirts to spend a beautiful summer!
﻿